Behind the Music: Jett Benson 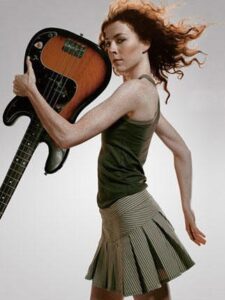 Oh my Jett. I love her so much. She’s our unlikely rock star. Quiet and studious, she’d rather be curled up with a book than out on tour.

The middle child, she’s more comfortable as an observer rather than a participant in the drama. And was her life drama. Little sister Nikki was the fighter. Big sister Presley was the diva. But poor Jett, she was Switzerland and hated all the conflict. So she played peacekeeper between her mother and her sisters. But peacekeeper is a tough role to play in the Benson family.

So she retreated into her books and her schoolwork, opting to study poetry at UCLA than pursue any music career outside of Satan’s Sisters. Jett would rather live in her head than in the moment. She pours out her heart in her song lyrics. It’s safer that way. Less likely to get hurt. Because Jett feels shit and feels it hard.

Rafe always asks Jett what she wants. And Jett thinks she knows; but what she needs is very, very different.

Jett was modeled on Melissa Auf der Maur from Hole.